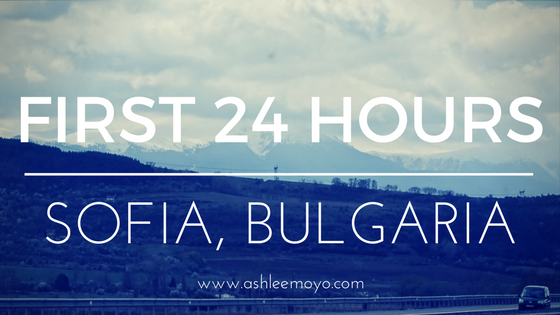 So on Thursday 30th March I was laying bed and decided that I desperately needed to get away before going into exam period mode. I ventured onto Skyscanner (which I spend lots of time window shopping on) and looked for the cheapest place to fly to from 6th to 8th April. BAM! Sofia, Bulgaria. Random? Yeah, a tad but that is what inspired me. I wanted to find Europe’s secret gems and not go to a traditional tourist spot. It was all part of #AdventuresWithAshlee. Discovering something new to share.

Fast forward to Thursday 6th April and there I was, at 4am my Mumma dropped me off at Cricklewood Station to catch a coach to Stansted Airport. I tried to fall asleep on the coach but it just was not working at all, partial because I was panicking about missing my flight as we were running 15 minutes behind giving me less than an hour until we start boarding the plane.

While I was up in the air and time was counting down, I started to think about what my experience would be however.. I did not know what to expect at all. So I touched down in Sofia and so the adventures was about to begin. So I thought, I had to get through passport security first. It was flowing pretty quickly despite the queue so shouldn’t have been too bad. It was my turn and I step up to the desk. Handed over my passport and waited. And waited a little bit more. The guy behind the desk looked at me, then my passport, then me again, then my passport again. He then proceeded to ask my what I am doing there, my obvious response was “Travelling – I’m here for three days”. He then asked for my boarding pass and I gave that to him. He then asked if I had photo ID with a more recent photo. “Ermm.. all I have is my ID I use at home but that has the same photo. I have my student ID” – I handed them both to him. He looked a little more and then got on his phone. By this time I have been with him a good 10 minutes and so I was like CRIKEY! Another gentleman came and he passed on my passport and asked me to follow him. Not going to lie, I wanted to chuckle (obviously because I have done nothing wrong). It reminded me of all those episodes of UK Border Force I’ve watched. I was then asked to sit outside a room on a bench. The guy that led me there went into the room and all of a sudden a loud roar of laughter came out of it. I was baffled. Then he came out with another two men, one looked more senior then the others and had my passport. He asked me “what are you doing here?”, “where are you from?”, “what’s your date of birth?”, looked at me then shrugged. He said something in what I am assuming is Bulgarian to the other guy and told me to follow him. Finally, he gave my passport and told me to go through.

That was not my only welcoming committee… 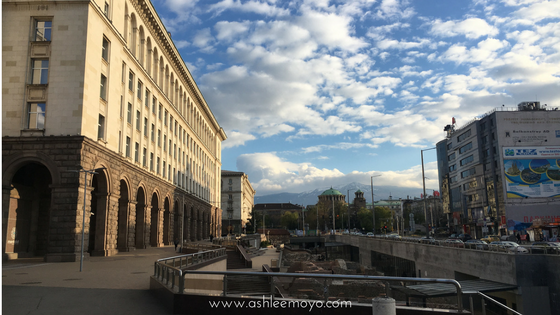 I grabbed my bag as it ended up in hold (thanks Ryanair *eyeroll*) and headed to the bus station. I had kind of memorised the directions to the hostel (thanks Hostel Mostel!) so I knew exactly where to go. I purchased two bus tickets as advised (one for me, one for my suitcase) and headed to the bus stop. I saw the bus was coming and trotted onto the bus, it was one bus and then a 20 minute walk. It was a 30/40 minute bus ride so I found a seat and got comfortable. About 7 minutes into the journey, the ticket inspectors get up and start checking tickets. I handed both of mine over when it was my turn and then it started. My second welcoming committee.

He started saying something to me in Bulgarian and I kept telling him that I didn’t understand in English. LOL. That’s irony right? (genuine question). He then showed me that I needed to punch it in this little yellow puncher thing. I said sorry I didn’t know, but he then said “fine” and showed me a ticket that was 40 lev. Yeah, I can’t afford that and please note the ticket was 1.60 lev. That is a heck of a hefty fine. I then tried to explain that I didn’t know and that I have two tickets and I can punch it now. He then told me that I had to leave at the next stop. I kept saying “I haven’t done anything”, “I have two tickets”, “No one told me and this is my first time in the country”. He did not give a fly fruit pastel. The bus stop and he grabbed me by the arm and tried to physically remove me. I shrugged him off and told him not to touch me and asked him why. The second ticket inspector came along and pointed at the no holes and said “problem”. I tried to explain that I didn’t know and before I knew it burst into a flood of tears (bless my little cottons).

A young lady then came over and told me not to cry and explain the problem. So I did, well one of them LOL. I was still sobbing a little. She then started speaking to them in Bulgarian, asked me where my ticket was and I explained I have two and he took both of them. For about 14 minutes they were going back and forth, then young men joined in, another lady then joined and they were going at these ticket inspector guys. The bus stop and he told me to get off and I started standing up (I thought the case had be lost). The lovely lady asked me if it was my stop, I said no so she told me to sit down and not to get off and she said something more to them. Next thing you know, the ticket inspector guy gives me my tickets back and they both get off the bus. My guardian angel she was. She stamped my tickets for me and I literally could not thank her enough. Literally, I had to keep repeating “thank you so much for your help”. CRIKEYYYY! The welcome committee game is strong! 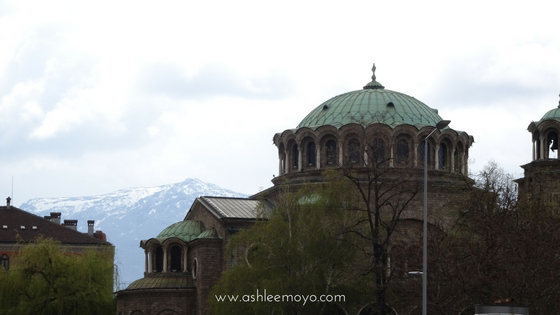 It literally shook me up and all I wanted to do was crawl into my bed. After a calming walk, I got to the Hostel Mostel and was greeted by a great smiley face at Reception. It was the kind of smile that was like a hug, just what I needed. The hostel was beautiful, really warm and inviting. The gentleman then checked me in was called Todd, really lovely and explained all the facilities Hostel Mostel has to offer their guests. I was taken up to my room, showed how to use my keys and my designated bed and locker. As Hostel Mostel include both breakfast and dinner in the cost for a guests stay, I was invited to down for dinner and told it would be a great opportunity to meet people. 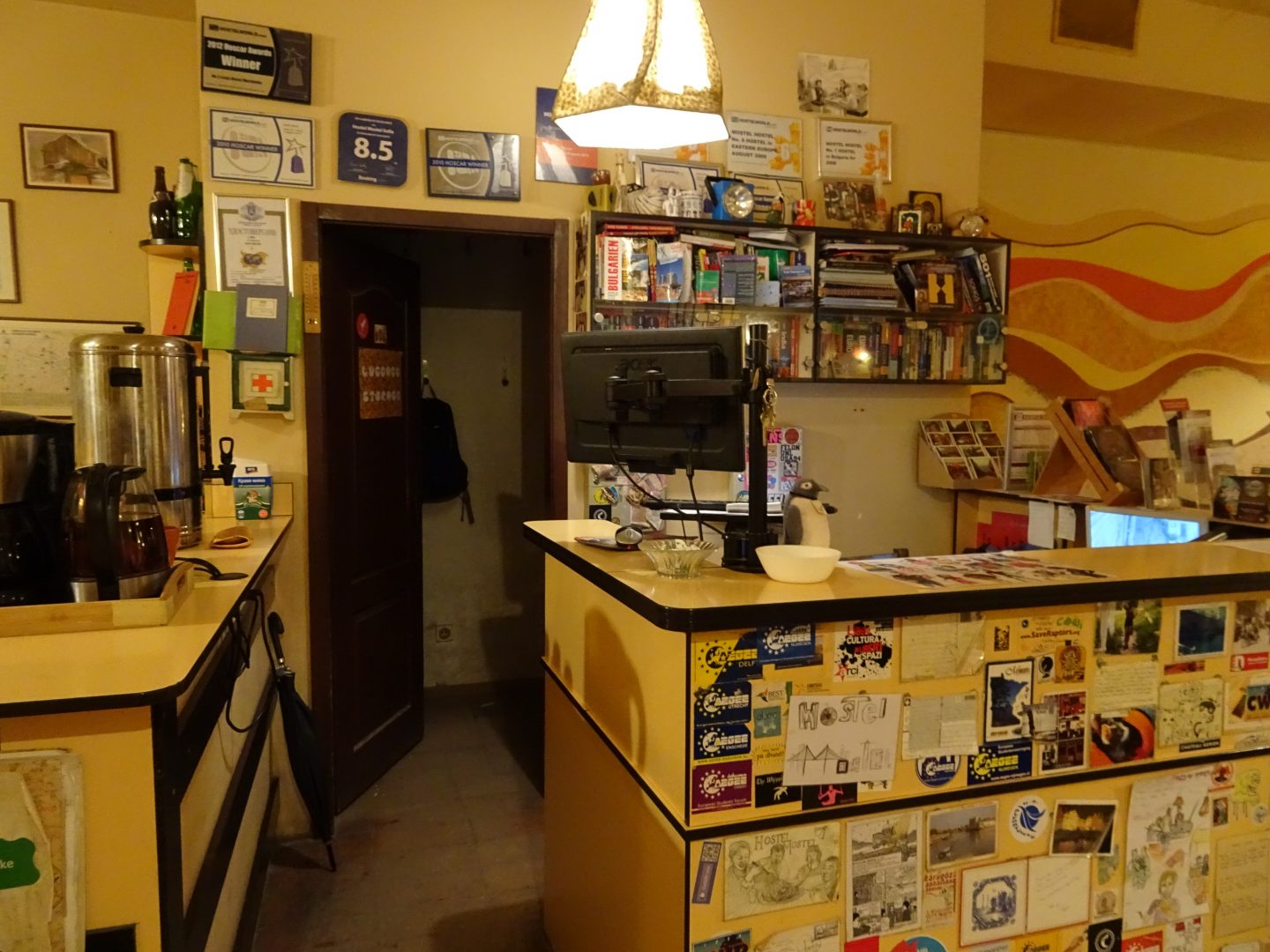 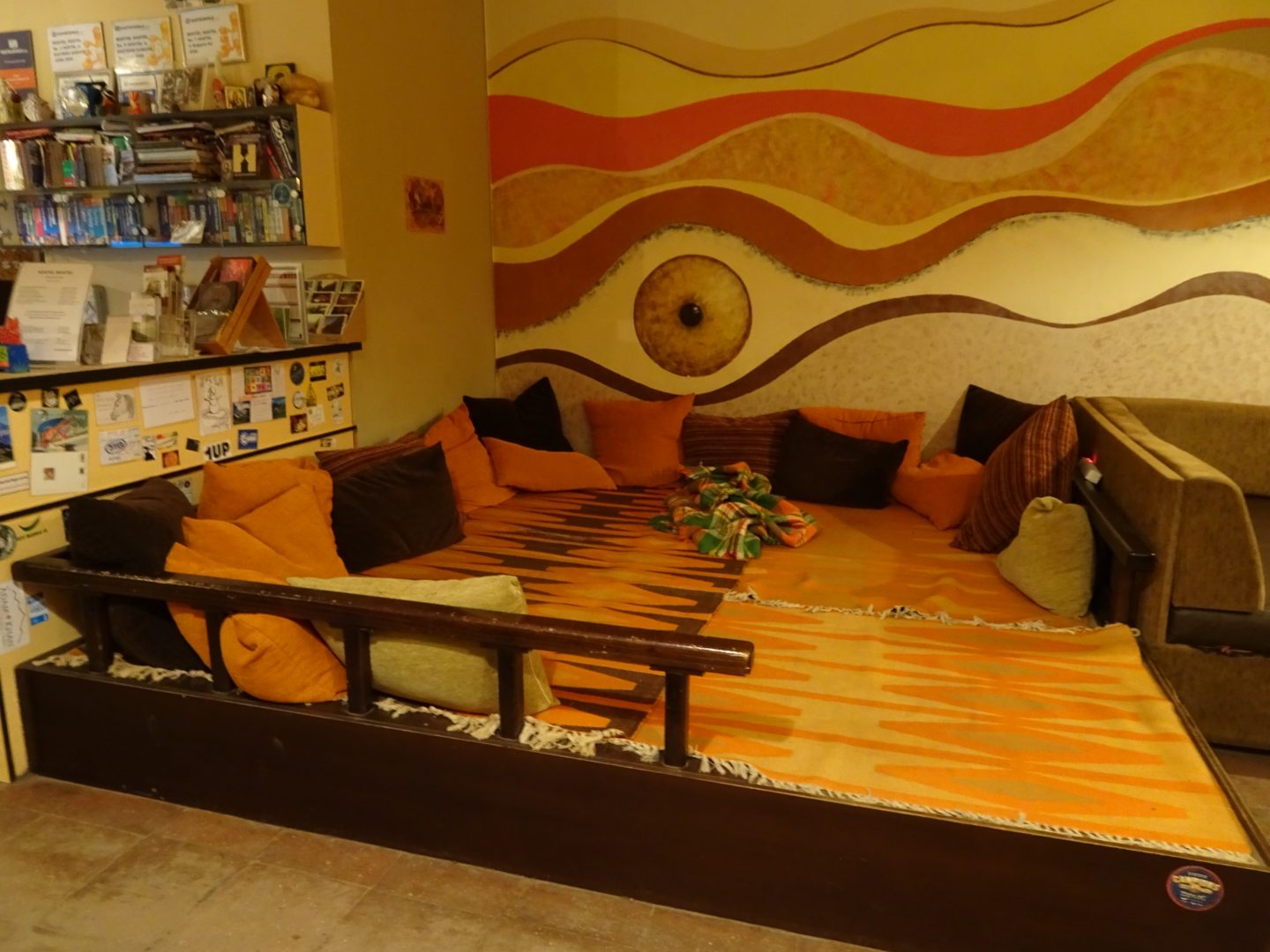 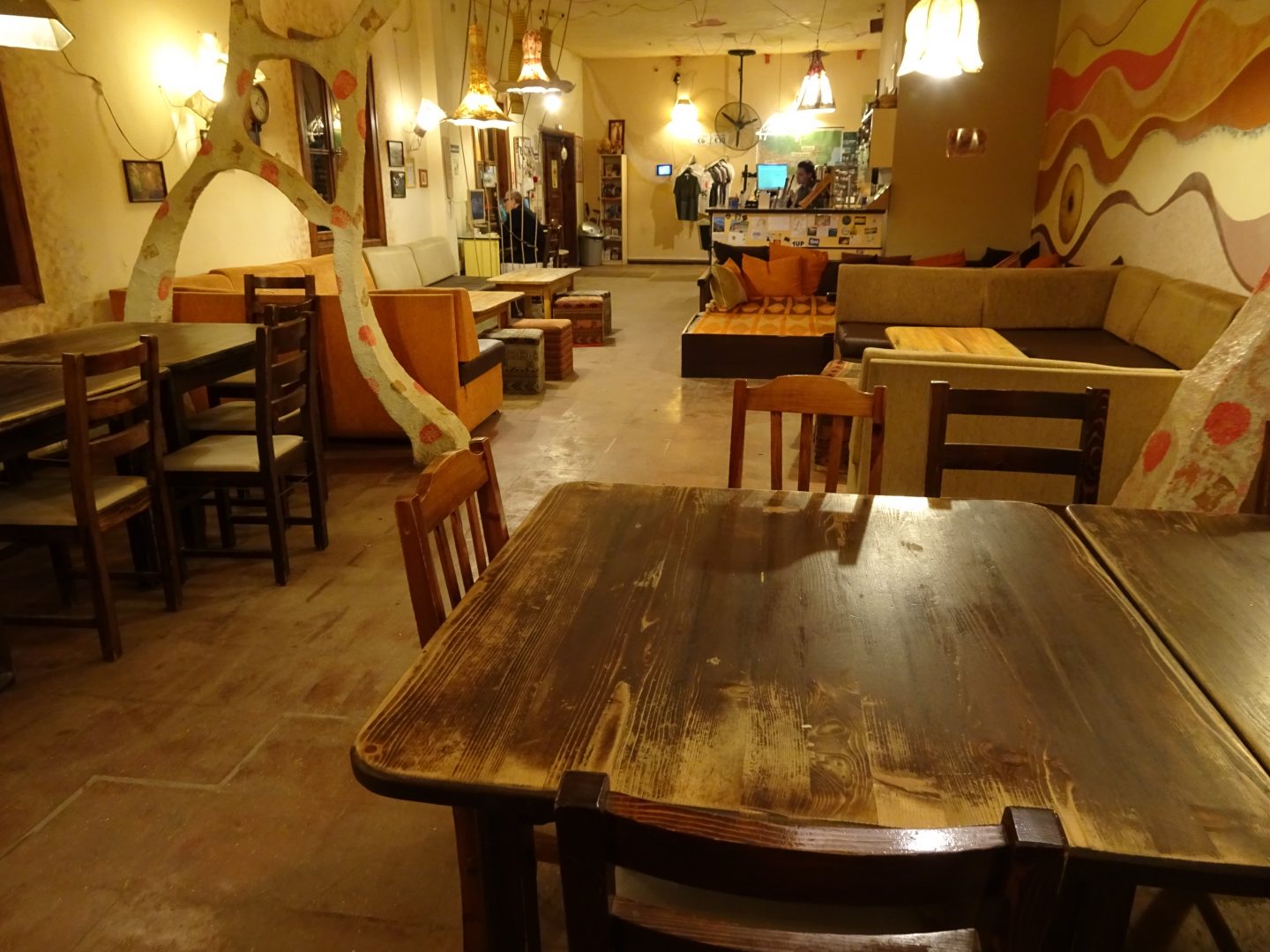 As it was about 2pm, I decided to have a little power nap and start my day again. Feeling refreshed by 4pm, I went to wander around Sofia. Hostel Mostel is located centrally and so I was only 7 minutes away from all the shops and some beautiful sights. As I hadn’t eaten since 7pm the day before, I decided to have a light late-lunch/ pre-dinner LOL. I went to somewhere called Happy Grill which offers food from around the world. Tacos, burgers, sushi, pasta and all the rest. I opted in for tacos as I wanted something small and cheap, didn’t taste the best. I guess I should have waited to taste tacos in Mexico. The dessert however, it was INCREDIBLE. It was strawberries with creamy creme brulee and colombo (the cake). If you ever end up there, I HIGHLY RECOMMEND IT. 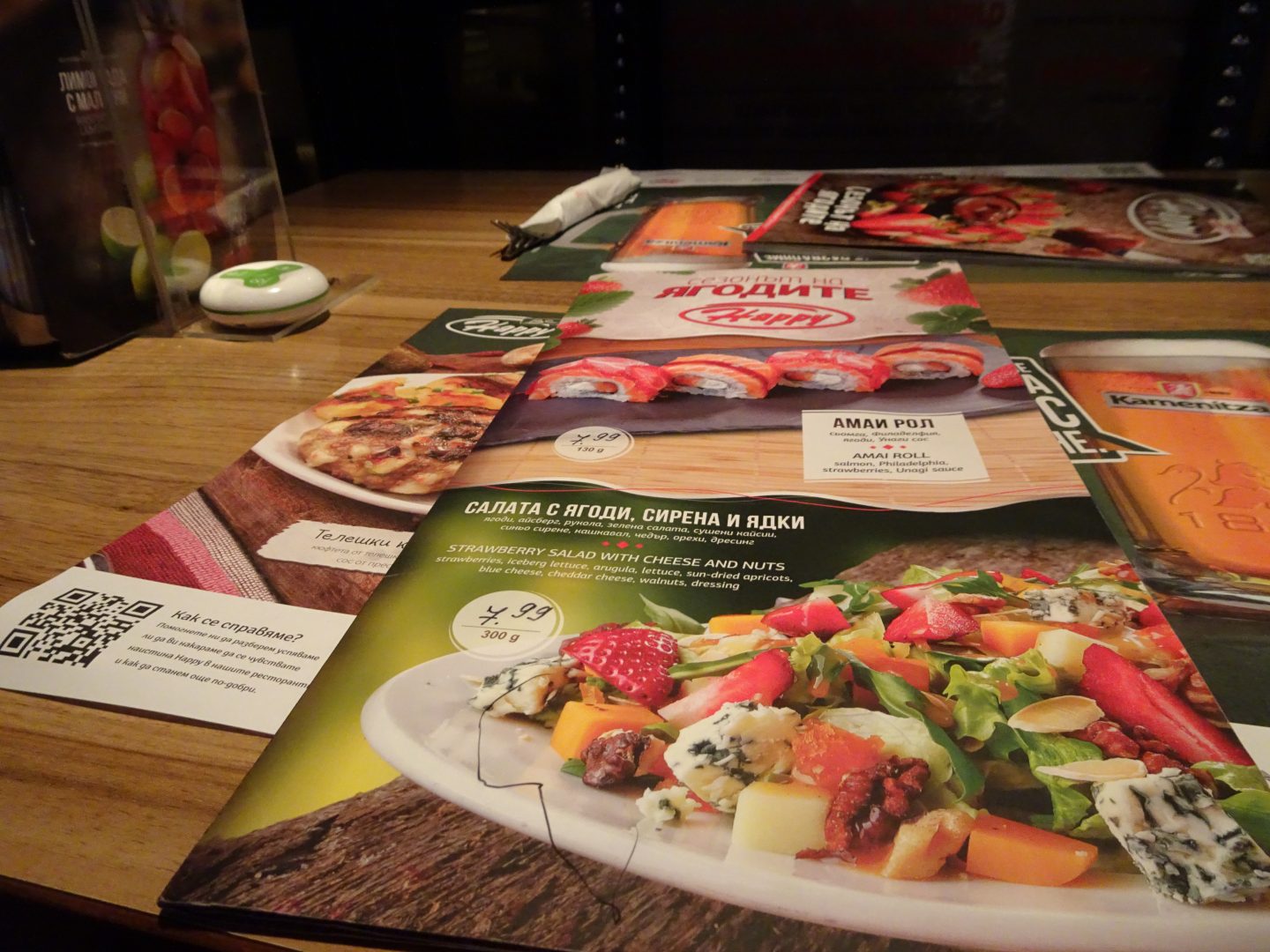 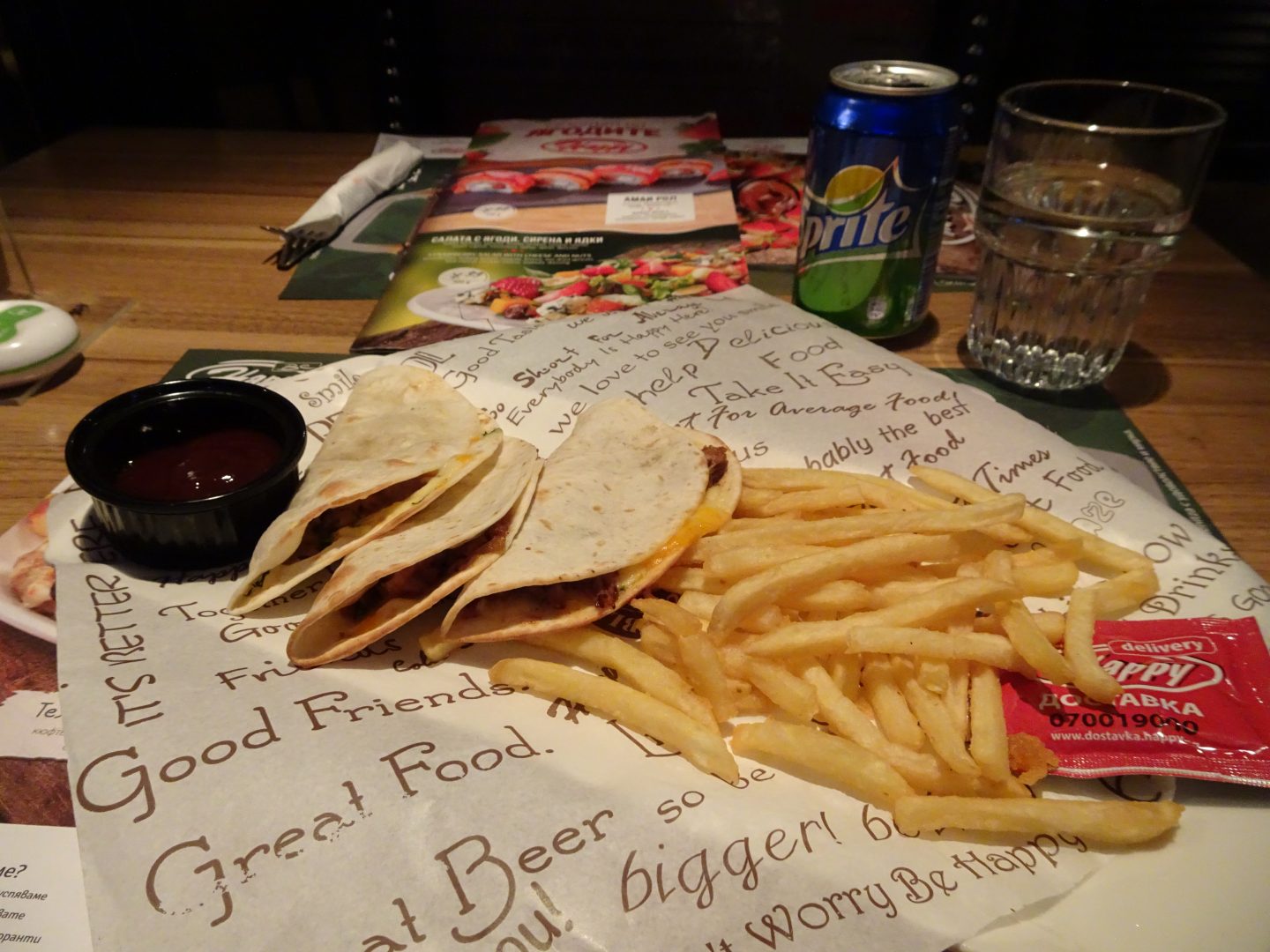 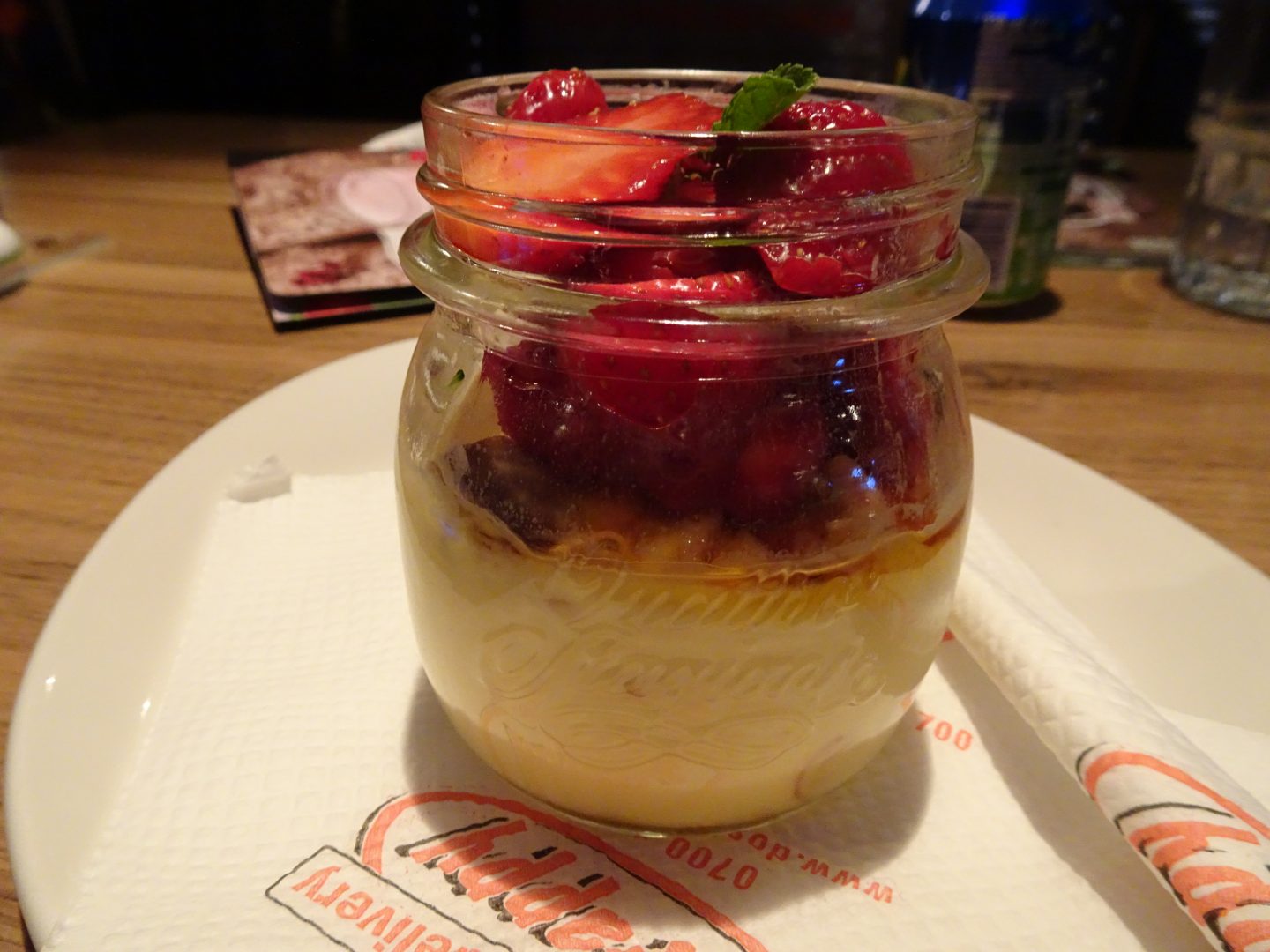 After my pre-dinner, I strolled back to Hostel Mostel and went to chill in my room for a bit. The weather was forecast to rain so I thought I should chill indoors, watch a bit of Criminal Minds read and a couple blog posts. It was then time for dinner, the actual dinner. The main room was buzzing, travellers from different places chatting and eating some Bulgarian cuisine prepared by Hostel Mostel. There were several options and it was all you can eat. I chose the salad, fried egg and potatoes, it was delicious! I definitely enjoyed it more then those tacos Lool. At dinner I got talking to a guy call Afik from Malaysia but was liking in Woking. It was nice talking to someone about their travels so far and where they plan to travel in the future. We were later told by a member of staff that every night at 10pm they organise a bar crawl for all guests and everyone is invited to come along. I was so down, any opportunity to meet new people. Unfortunately, after dinner I went to my room to watch a movie and ended up KO-ing and waking up at midnight.. darn. 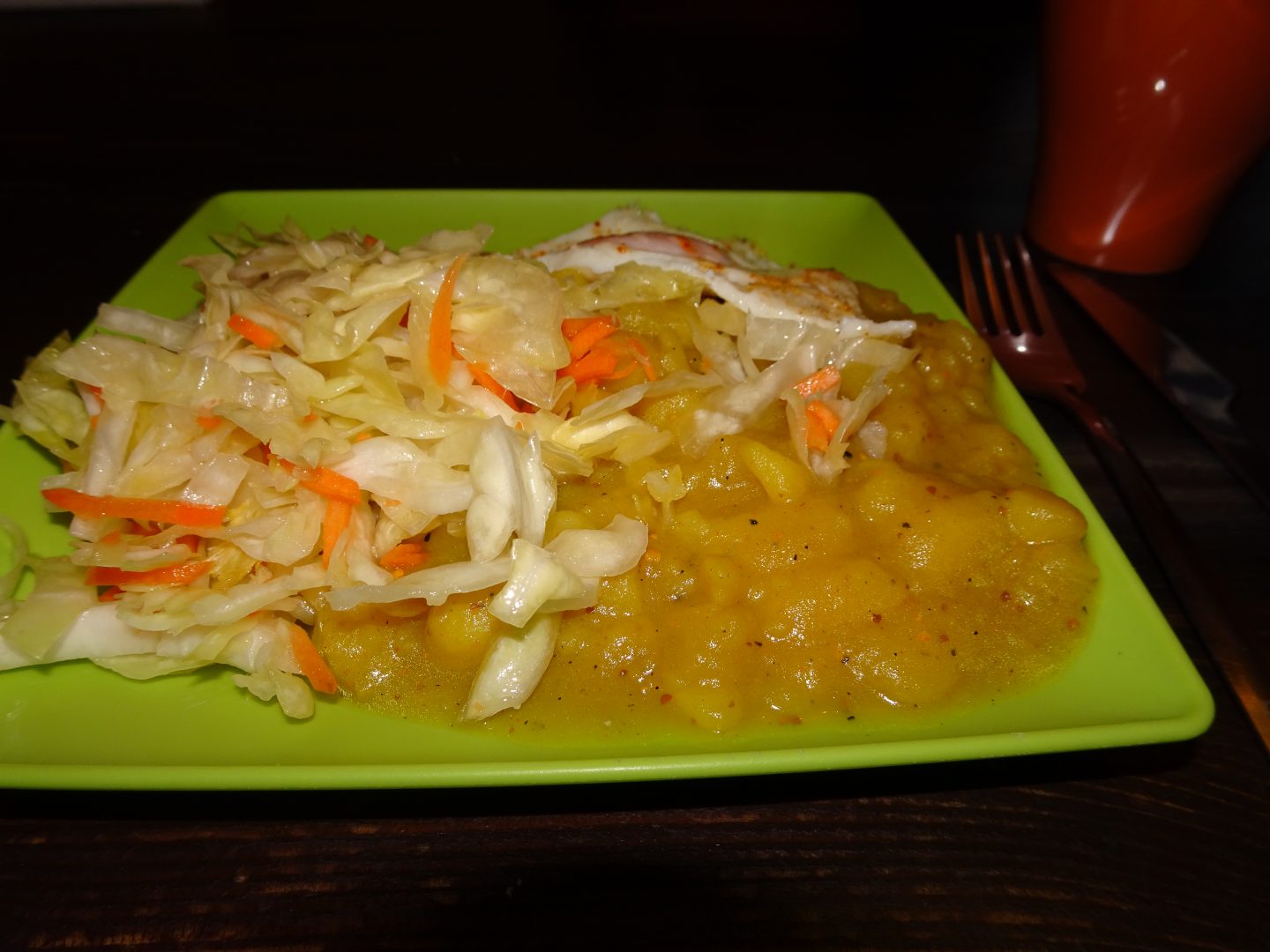 Although day one started off a bit rough, it ended up being lessons learnt and I feel like it was in the top 20 of things that could happen and I SURVIVED haha! Overall, it was a great start to my second solo trip. I was pretty nervous about it at first, but Sofia was starting to look like somewhere I would get comfortable and enjoy. If you are thinking of taking a trip to Sofia, I would say do it.. and remember to stamp your ticket! 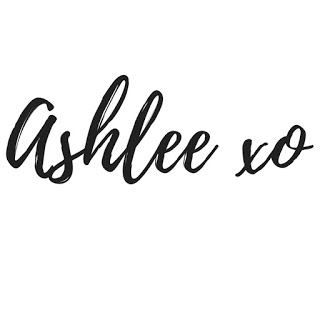